Flashing lights, Mexican waves and dancing are not what you would usually expect to see in Slough Library but on Saturday, April 17, the bookshelves were moved aside to create space for a new Live Music section to move in and Slough library was transformed into a live music venue by volunteers from Slough Library and local Music Charity Swipe.

Swipes young volunteers took a full stage worth of equipment and a stage up to the first floor of the library and set it up in the space that the library volunteers had cleared.

In the amazing short time of three hours several bands had sound checked, stage and lights were set up and the library had been transformed into a live music venue by swipes well trained young volunteers.

Opening act Busker Rhymes warmed the growing crowd up playing cheesy pop, he nearly didn’t make it after cutting his hand in an accident earlier during the day but with 3 fingers strapped up he performed in his usual style using his loop pedal to full effect looping guitar vocals and beat during his performance.

Rasa-Losethefear got the hundred strong crowd swaying whist singing covers and received a very warm response from all.

Jessie Silence eagerly took to the stage with acoustic guitar in hand to a very warm welcome from the library audience who appreciated his set.

Next up were The Pedal Pushers, a band so new some of them were still taking the wrapper off. The crowd gave the 13-year olds a very warm welcome and after a little bit of a hand with guitar tuning by Swipe’s Jamie Green the rookies kicked off their set.

Lead singer Daniel Murphy was an instant hit and by the time the pedal pushers were playing their cover of Semisonic’s closing time they had gained a fan base.

The slightly more mature three-piece rock band Wilson made up of brothers Owen and Ross Wilson interchanging lead vocals guitar and bass with Graham Henderson on drums. Towards the end of their set they announced that the next song came with a severe coolness warning and then put on sunglasses to protect themselves from the musical rays of ice cold coolness.

Members of the audience shouted “better” to which Ross replied we might play better in a while…. he was referring to their catchy song called “better” which they played much to the delight of their fans.

In contrast Diamond Bevell came out with no interchangeable instruments and just his spoken word which was more than enough to capture the library audience who didn’t need to be told to shush to hear him.

After Bevell the dance group spiced stepped up with some high energy moves livening things up and providing some diversity to the evening.

Lizzie Massey was back in Slough again from Brighton before she even took her seat there were shouts for favourite songs “teenage mind” and “slough song” after Lizzie’s first tune she was persuaded to Jam out Slough song with Drummer Dan O’Donaghue “The Slough Song” is a song that was written during a swipe songwriting workshop last summer and has been produced and made into a music video by young people from Swipe, Dan and Lizzie are both on the studio version but had never played together before in fact Lizzie hasn’t even heard the version with Dan’s Drum beats on before so for her it was a true Jam.

For people who hadn’t heard the song before the initial lines “ I can’t eat or sleep in slough coz I ain’t got no money” bought a chuckle, for those who know the most infectious song to ever come out of Slough singing with the chorus was a must.

Fried Squirrel were up next currently only one step away from playing the O2 arena in the Vodaphone Live and Unsigned competition they were showing why they have reached that stage of the competition playing with true class. The unmistakable vocal of Simone Picknett coming out over the band who have now gelled so tightly.
Daneil Endersby on Drums and backing vocals, Tobias Hawthorne with some classy bass lines, new guitarist Craig Malone adding something to the structure of the songs, not forgetting of course everybody’s favourite the invisible fifth member of the band – Simone’s imaginary friend Pete who had everybody laughing dancing and singing, definitely one of their best performances to date. 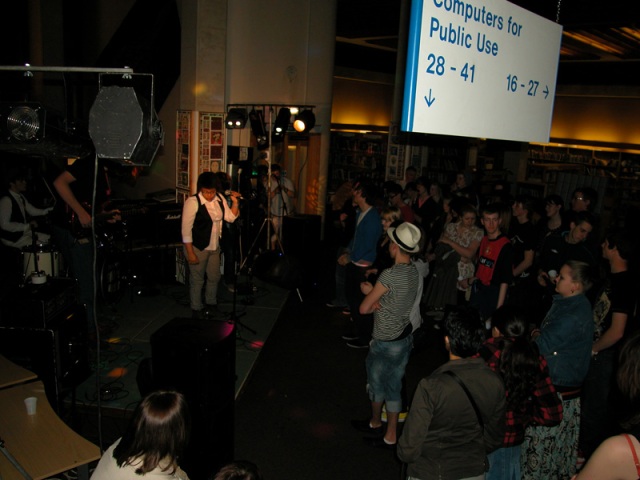 After the Squirrels stepped up Ben “Barbie boy” Collins and the rest of Skadilly promising fun and dancing and delivering just that with their Ska based rhythmic fun packed set moving the crowd making them jump up and down to the beat and trying to set a new world record for jumping in a library, a great finish to a great night.

Both the bands and the audience were impressed with the library as a venue, with many people asking when the next gig is and some people saying it’s the best venue in town by far the Library has won some fans itself and shown what a great and versatile space is has.