Over the Christmas period SWIPE organised a trip to The London Bridge Experience and The London Tombs, to experience a tour called “The Christmas Nightmare”
Some of the young people at SWIPE thought it would be fun to dress for the occasion,and soon after there was a Zombie Outbreak in the offices of SWIPE.

A group of 19 Zombies left the SWIPE offices and were seen to head towards Slough Train Station.

Reports state that the Zombies appeared to be organised and travelling together.
They made their way as a group to Platform 3 heading towards London.

Startled commuters were obviously affected by the sight of Zombies on the platform,as commuters phone cameras flashed the Zombies all slurred the word “BRAINS” which is apparently the Zombie equivalent to Cheese.

The rest of the journey was much the same with the young people obviously enjoying the Zombie Outbreak that they had created. 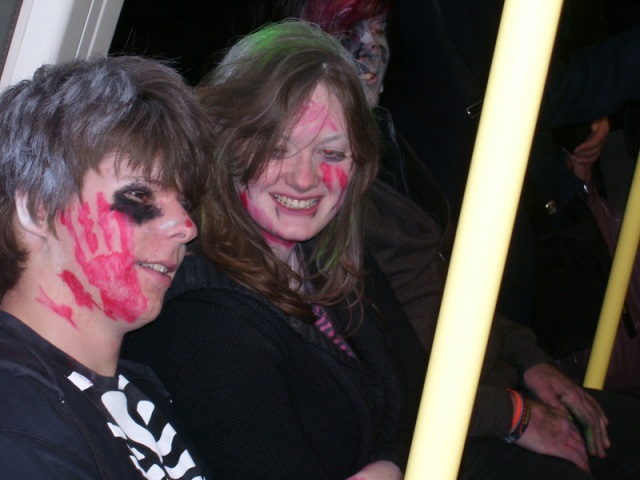 On arriving at the London Tombs the group were asked if they had come for a job! One of the tour guides commented to one of the young people that he had never seen an Emo Zombie before.

Once inside the Zombies were treated to a tour of old London by Characters’ such as Charles Dickens and the woman in charge of sticking heads on stakes at the Tower of London.
The Zombie tourists enjoyed walking through the London Bridge Experience but nothing could prepare them for the London Tombs.
The Zombies were split into smaller groups before heading into the dark depths of the Tombs, they were issued with instructions that the only way out was to keep walking forward.
For the next 20 minutes there were screams of terror,tears of laughter,arms coming out of walls, shrunken heads swinging in the air and Zombies that wern’t from Slough!
Afterwards Sough’s army of musical Zombies were in high spirits recollecting the different things they had seen in the tombs, the man running around chasing them with the noisy chainsaw seemed to be a big favourite amongst the zombies!
The trip back proved just as amusing as the trip there with the zombies obviously enjoying themselves, they stopped for food before returning to Slough, the 6”2’ Zombie leader asked startled cafe staff if they had a table for 19 undead?

There were no brains on the menu so they settled for pizzas and pasta. 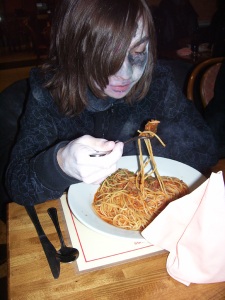 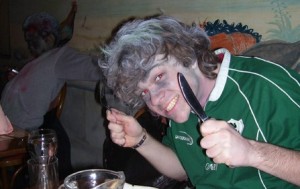 Once back in slough the Zombies were miraculously cured and turned back into normal young people….if there is such a thing…